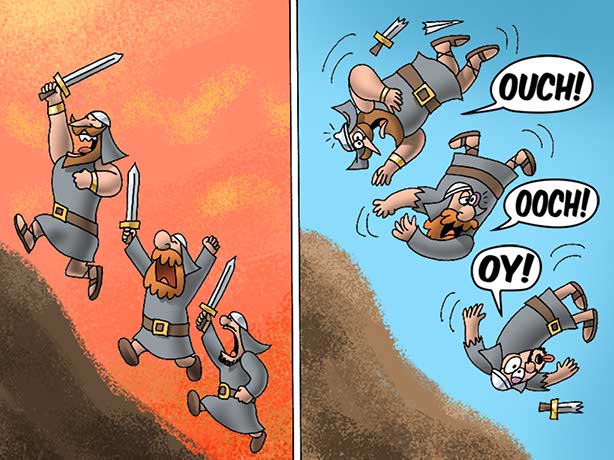 The Right Place at the Wrong Time

Now Bnei Yisrael realized their huge mistake. When the spies gave over their bad report, the people should not have listened to them. They should have thrown tomatoes at them and booed them right off the stage!

And now they wanted to make up for it. Some of the people – known as the Ma’afilim – had an idea:

“Let’s show HaShem that we’re really sorry about what we did. We’ll go into the land and fight for it – right now! Come on!”

“Great idea! Let’s show HaShem that we do trust in His promise, and that we do believe the land is good and we will conquer it!”

“No!” said Moshe. “Do not go to battle without HaShem’s permission! HaShem has already decided that this generation will die in the desert and will not enter the land of Israel!”

Moshe Rabbeinu knew that their plan was too little, too late. But he could not convince them to change their minds.

The Ma’afilim got ready for battle.

They headed straight for the mountains at the border of the land of Israel.

But as soon as they started climbing the mountain, soldiers from the nations of Amalek and Canaan came charging down at them! Bnei Yisrael didn’t stand a chance against them – because HaShem was no longer at their side – and they lost the fight.