The Declaration of Dependence 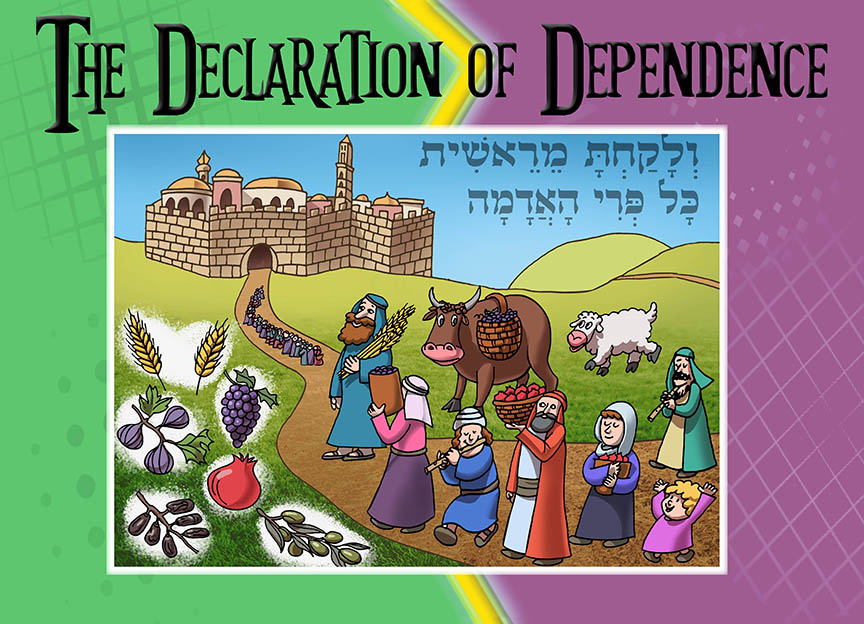 The Declaration of Dependence

As Farmer Ephraim entered the yard of the Beis HaMikdash, he would put his basket of fruit on his shoulders and announce in a loud and proud voice: “Higaditi HaYom – I declare today to HaShem, that I have come to the Land which HaShem has promised our forefathers.”

Farmer Ephraim together with a Kohen would hold the basket, and they would wave it up and down and in all four directions – showing that the fruit belonged to HaShem, the Creator of the world.

Then he would describe the humble beginnings of our nation, when Yaakov arrived in Egypt with no more than 70 people; our bitter slavery in Egypt; how HaShem miraculously took us out; and finally, how we arrived in the “land filled with milk and honey” and merited to the building of the Beis HaMIkdash.

After this recital, Farmer Ephraim would take the basket and place it down before the Mizbei’ech (the altar). He then bowed with respect and exited. Now it is officially a food-gift for the Kohanim who were on duty at that time… Yummy!

What a beautiful scene! What gratitude! Mamash Gevaldik!

The Declaration… Independence or Dependence?

Here at Shazak, we try very hard to come up with good material and catchy titles. At times, you may have to think a bit to figure them out.

The above title we called “The Declaration of Dependence.” If that sounds familiar it’s because it is similar to the famous American “Declaration of Independence,” written by the founding fathers of America (including Thomas Jefferson and Benjamin Franklin), in Philadelphia, in the year 1776. It was the statement which declared that the 13 colonies were no longer under British rule and would be INDEPENDENT!

Here, the words said during the Mitzvah of Bikkurim were also a declaration – but a Declaration of Dependence – dependent on Hashem for everything we have.

The Mitzvah of Bikkurim is certainly a big deal! Nobody says it better than the Midrash:

“Let the first (the Jewish People) bring the first (Bikkurim first fruits), to the first (the Kohen who is first in the service of HaShem), in the first place (the Beis HaMikdash) to the First of all creation (HaShem).”