8 / 23
Sefer Devarim — Eikev
Prev Previous An Attitude of Gratitude
Next Simple?! – A Shazak Scenario Next 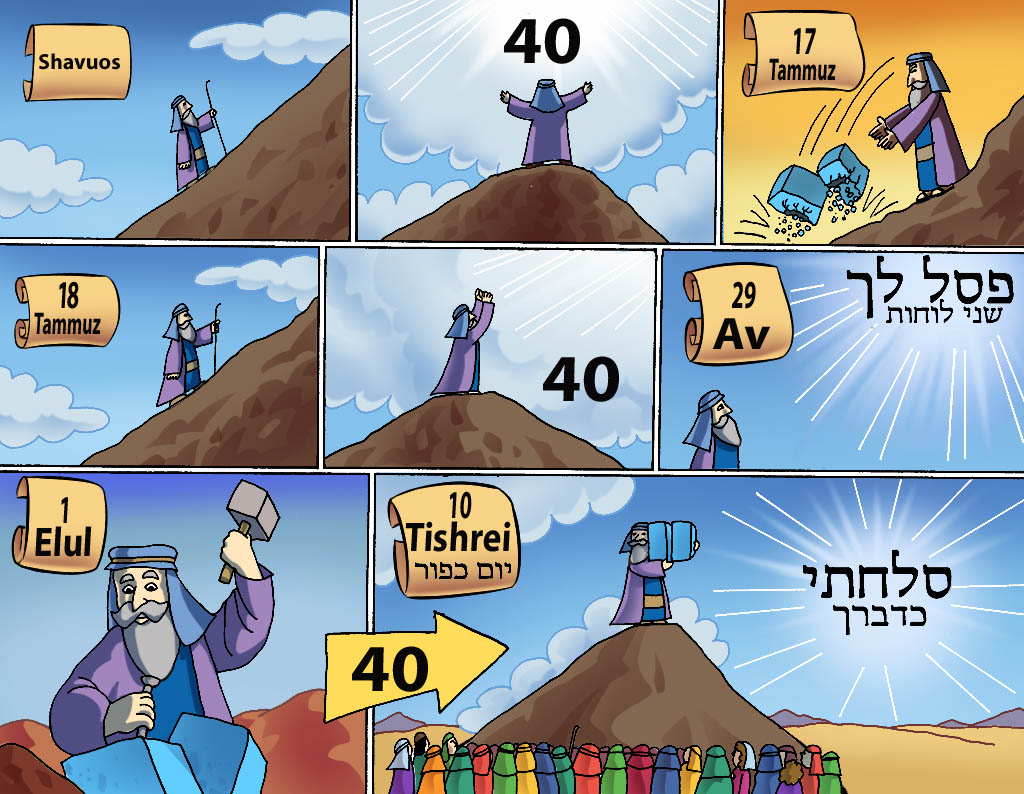 Back in the Book of Shmos, we learned about the Golden Calf Episode and the breaking of the Holy Luchos. That was really bad… But this story was far from over. Here, Moshe tells his nation “the rest of the story.” It’s a story of sadness and hope – a fitting lesson for Bnei Yisrael to learn before they enter Eretz Yisrael.

Moshe’s face lit up as he retold the events that led to the giving of the Ten Commandments, “On the 6th day of Sivan, I climbed to the top of Mount Sinai. I was up there for 40 days and 40 nights – and what an incredible experience it was! I neither ate bread nor drank water… I was like an angel! HaShem taught me the entire Torah and carved the Ten Commandments on 2 Luchos made of beautiful sapphire.”

“Ok. That’s the sixth day of Sivan. We know all about this.”

Now Moshe’s face turned serious, “On the 17th of Tammuz, the very day I received the holy Luchos, I came down and saw you dancing around the Eigel HaZahav, the Golden Calf. Shocked and dismayed, I threw the two Luchos to the ground, shattering them to pieces!”

Moshe continued speaking passionately, as if it were happening right then and there, “HaShem threatened to destroy you all, and instead make me and my descendants the “new and improved Jewish nation.” So, the next day, on the 18th of Tammuz, I hiked back up the mountain to plead your case before HaShem. Once again, for 40 days I neither ate bread nor drank water, and this time it was because I was so busy Davening with all my strength for HaShem to forgive you. I prayed. I begged. I pleaded. Finally, HaShem told me that I should carve out 2 new Luchos. I came back down from the mountain on the 29th of Av.”

Moshe continued, “I carved the second set of Luchos and on Rosh Chodesh Elul, I climbed up the mountain for the third time. I continued to pray for yet another 40 days and 40 nights. Finally, complete forgiveness was granted. On the 10th of Tishrei, HaShem said, ‘Salachti Kidvorecha – I have forgiven you, just as you requested.’ And then I came down the mountain with the new Luchos along with a fresh start for us, the Jewish people.”

“That’s it! The 10th day of Tishrei… that’s the day of Yom Kippur! The day of forgiveness!”

Moshe Rabbeinu, the master teacher, concluded with an important message, “HaShem told me, ‘Despite the Sin of the Golden Calf, arise! Go lead your people.’ Yes, my dear nation, HaShem had instructed me to place in the holy Aron both the shattered pieces of the first Luchos together with the second complete set of Luchos. Do you know why HaShem wanted the shattered pieces to also be placed there?”

“Hmmm… that’s a good question! I wonder if Rashi explains this.”

Moshe answered his rhetorical question, “I’ll tell you why! It’s because even in the worst of times, when hope seems to be totally shattered, through sincere prayer and effort, we can fix things up and once again become whole! And when you finally come to Eretz Yisrael, know that you will make mistakes (even big ones), but never ever give up hope. Return to HaShem and He will return to you.” 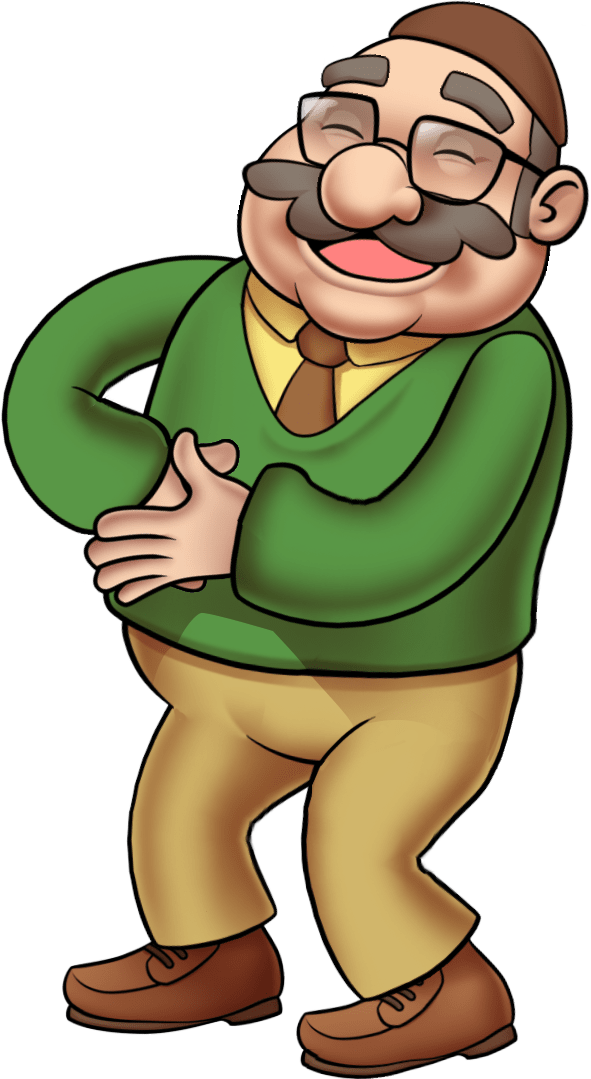 Question: Were the Two Tablets round or square?

If you’re intrigued and/or confused by this question … join the club! It’s because you see both versions wherever you go. You may notice an image of the Luchos in your local Shul, engraved on the holy Aron where the Torah is kept. Often, they are beautifully woven on the curtains covering the Aron. You may also see pictures of the Luchos in books, including of course the Shazak Parsha book.

Bottom line? Nowadays, some Luchos are rounded at the top and others in the shape of a square. So what’s the deal?

The fact is, according to the Sages of the Talmud, each one of the Luchos measured exactly 6x6x3 Tefachim. In modern terms that’s around 18x18x9 inches. In addition, the Talmud declares that the items in the Aron filled it completely, leaving no empty space. Now think about it… if they were rounded on top surely there would be some empty space.

So how did the square Luchos evolve into round Luchos?

Surprisingly, this design appears to have begun several hundred years ago, and it’s the invention of some famous non-Jewish European artists. Oh well.

Moshe was up on the mountain with HaShem three times, each time for 40-days: 40 days for the first Luchos, 40 days pleading to HaShem, and the last 40 days receiving the second Luchos. Add them all up and what do you get? 120.

Interestingly, in one of the last Pesukim of the Torah we are told that Moshe lived 120 years. That’s 120!

Plain coincidence? Or is there a connection between the time Moshe was on the mountain with HaShem and the total years of his life? What do you think?

Here at Shazak we try our best, and it isn’t always easy to bring the Parsha to life. One way we do it is by having people (whom we imagine to be sitting and munching peanuts as they talk) comment during Moshe Rabbeinu’s long, long, speeches. Did they really comment? It’s anyone’s guess, because the Torah doesn’t record these comments. But at times, Shazak takes the liberty of inserting funny comments, which we know did not take place. Here’s one example:

Person #1: “Hmmm… that’s a good question! I wonder if Rashi explains this.”

Naturally, if anyone would have an answer, it would be the most famous Chumash explainer of all time, none other than Rabbi Shlomo Yitzchaki, a.k.a. Rashi.

That’s why Person #1 comments, “Hmmm… that’s a good question! I wonder if Rashi explains this.” 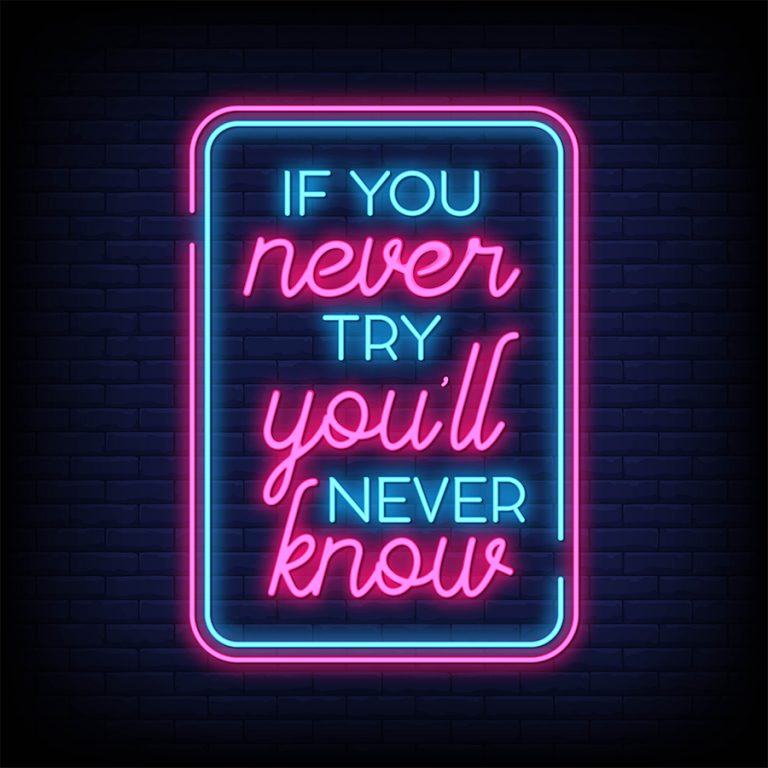