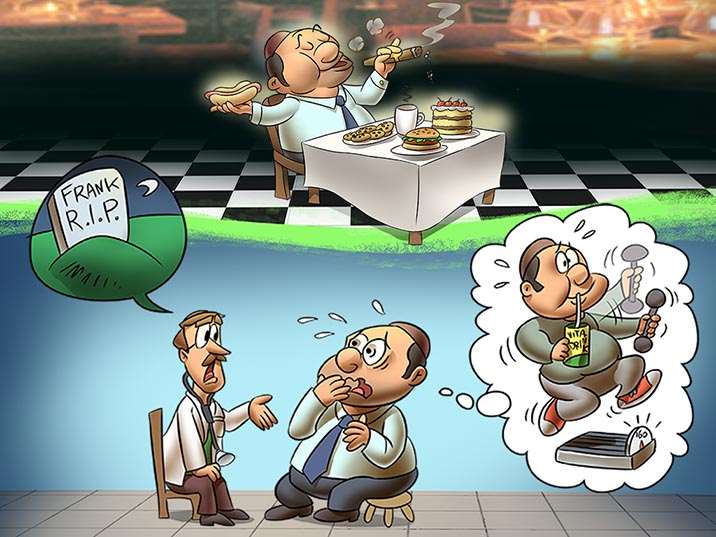 Why did HaShem have to mention the passing of Aharon’s two sons? Surely, HaShem could have gotten His point across without mentioning this tragedy!

Well, here is what our great sage, Rashi, explains, retold in our own Shazak style:

Sam Ouchkiwitz was in for a surprise. Sam often went to see his doctor, Dr. Rofeh, due to his poor health condition. You see, despite the warnings and precautions of his doctor, Mr. Ouchkiwitz simply neglected his health – plenty of unhealthy foods, hardly any exercise, and to top it off, Sam just loved to smoke cigarettes. And… he would forget to take his medicine!

Sam usually had to wait an hour or so in the waiting-room for his doctor’s appointment, (that’s why they call it the “waiting room”), but to his surprise, now he was immediately called in!

“Doctor!” he exclaimed. “Mah Nishtanah? Why is this appointment different from any other appointment? You were on time!?”

“Sad news,” answered Dr. Rofeh. “I’ll be frank with you. Frank Pasdoway had the appointment ahead of you and… and… “

“I don’t believe it! Frank Pasdoway passed away?! Why? From what?”

“From the exact same condition you have.”

“Doctor! Doctor! Tell me again what to do, and this time I’ll take notes! I’ll take my medicine daily. And I’ll exercise. I’ll even stop smoking! Whatever you say, doctor!”

Now, what would have been if Sam’s doctor didn’t mention Frank’s passing? Do you think it would have had the same effect?

Hearing what happened to Frank inspired Sam to do better.

Now back to our Parsha: