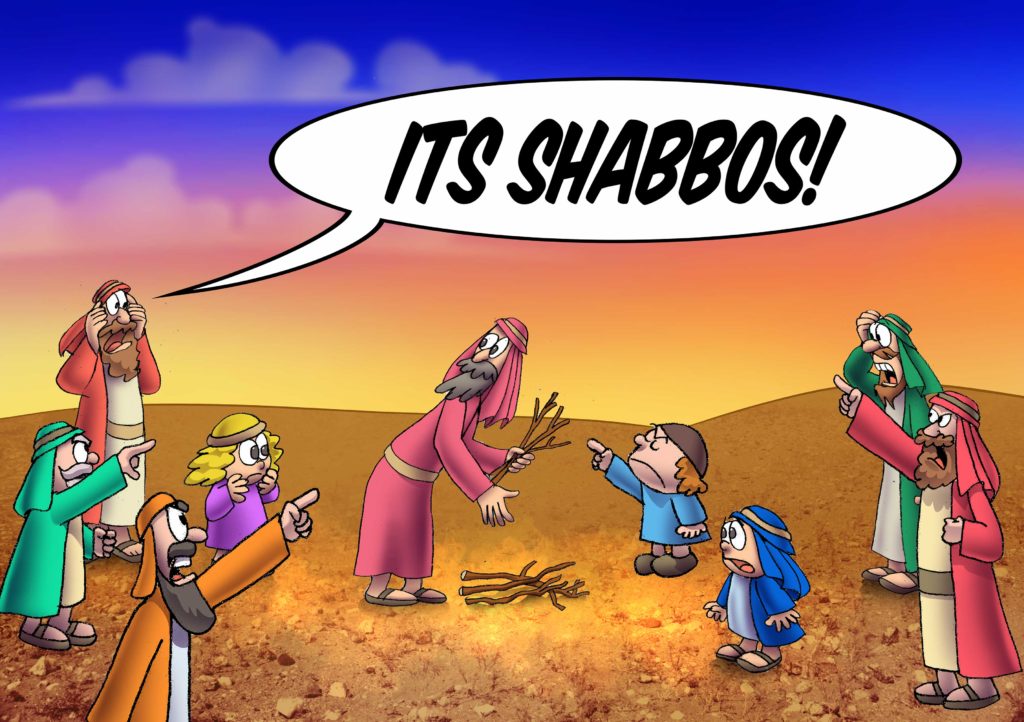 After the episode of the spies, Bnei Yisrael were feeling down. The people walked around in a daze, not believing their fate. Sadness and despair hung over the camp like a giant black cloud.

Here is a typical conversation between two imaginary men, Shimon and Yehudah:

“How can it be?” Shimon kvetched to his friend, Yehudah. “We will never enter Eretz Yisrael!”

“Yeah! It’s all because of the spies and their evil gossip!” Yehudah lamented.

“Wait a minute. Since we won’t be entering Eretz Yisrael, it seems to me that we don’t need to keep the Mitzvos anymore!” Shimon exclaimed.

“Yeah, that makes sense,” agreed Yehudah. “If we lived in Eretz Yisrael, we’d live as proper Jews and follow the Torah. Since we’ll just be wandering around the desert, who needs Mitzvos anyways?”

Oh no! This type of attitude could have spread like wildfire and before long hardly anyone would keep the Torah! Yet, there was one man, by the name of Tzelafchad, who decided to take action.

Tzelafchad marched out of his tent and made a big show of stomping his feet extra loudly so everyone would notice him.

“Hey, is Tzelafchad headed to work?” Yehuda wondered. “On Shabbos?!”

“Maybe he’s getting a head start on our no-more-Mitzvos-campaign!” suggested Shimon.

Along with a bunch of friends, they followed Tzelafchad and witnessed as he began to gather wood – an act that violates the holy Shabbos!

“Tzelafchad, didn’t you hear?” an observer called out, “Moshe told us in the name of HaShem that gathering wood is strictly prohibited on the holy day of Shabbos.”

Shimon decided to stick up for Tzelafchad. “Don’t worry about punishments. That’s a thing of the past. Don’t you realize, we aren’t going to enter the Holy Land so we don’t have to be holy!”

Tzelafchad thought to himself, “Aha, my plan is working. I am going to show them that Shabbos is not a thing of the past… it’s forever and forever.” He continued to gather twigs and sticks, enough to build a large bonfire. The onlookers could already taste the perfectly charred hot dogs and roasted marshmallows for dessert. Yum!

The judges of Bnei Yisrael got word of Tzelafchad’s deliberate Shabbos violation. They ran right over and gathered all of the evidence they needed.

“Excuse me, Tzelafchad,” one of the judges called out, “you have transgressed the laws of Shabbos, and we have witnesses to prove it. HaShem has spoken and has commanded that you be punished. Come with us to receive your punishment.”

Bnei Yisrael looked on in shock and awe. “What?!” they gasped, “HaShem still wants us to keep the Mitzvos?”

“If HaShem wants Tzelafchad punished for sinning, it means He doesn’t want us to sin!”

“We need to keep the Mitzvos!”

Tzelafchad overheard Bnei Yisrael and smiled. His plan had worked!

“My plan has worked! Nobody will ever, ever forget this Shabbos lesson!”

Bnei Yisrael saw that they were definitely obligated to keep the Mitzvos. Tzelafchad was such a big Tzaddik that he was willing to give up his life, just so he could prove to Bnei Yisrael that they still had to follow the Torah.

Indeed, Tzelafchad was the ultimate Mitzvah Man, and later in Parshas Pinchas and Parshas Masei the Torah will introduce us to five incredible daughters of his, known as Bnos Tzelafchad, the daughters of Tzelafchad.