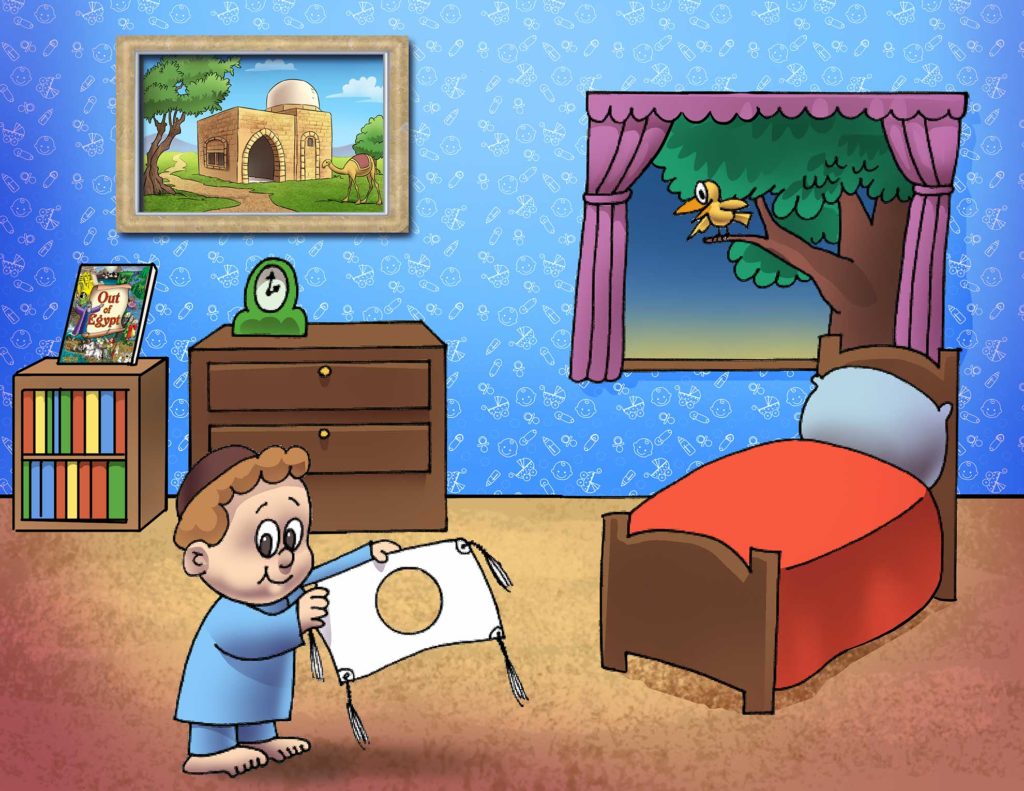 “The next Mitzvah,” said Moshe, “is called Tzitzis. These are threads knotted in a very special way that are attached to the corners of a man’s four-cornered garment. When we look at the Tzitzis, we are reminded of the 613 Mitzvos of the Torah!”

Remember back in Parshas Mikeitz, we talked about people who tied strings around their fingers to help them remember things? Just in case you forgot, (maybe you need a string reminder too!) we’ll tell you again – but this time with a story.

“Feivel, did you bring your chessboard so we can play during recess… Remember? You told me you would!”

“Feivel, did you forget your lunch again?”

To all those questions – and about a million others – the answer was the same: “I forgot.”

One day, Feivel’s mother finally realized that she had to do something about this forgetting problem of her son. “Feivel,” she said, “please tie this string around your finger, as a reminder that you need to have all your things with you before you leave the house in the morning.”

The next morning, Feivel was bungling his way out the door when he suddenly noticed something. “Hey, what’s this? A string on my finger! Oh, right. It’s there to remind me to get my . . . let me think now . . . that’s right, my backpack with my lunch, my homework, chessboard, and my other super-important stuff!”

It worked. Forgetful Feivel Fergesson was no longer forgetful.

Tzitzis accomplish something similar. When we see these strings dangling on our sides, we remember that we are special people with special things to do: Mitzvos.

In addition, for those good at math – Tzitzis reminds us of the 613 Mitzvos.

Add up the number value of the Hebrew word Tzitzis – ציצית – and you get 600. Now add the 8 strings and 5 knots, and what do you get? 612! Ahem… That’s if you have a broken calculator.

Let’s try it again… And what do you get?

613 – that’s the exact number of Mitzvos there are in the Torah!

Hey, not fair! Why is Shazak talking about a boy, Forgetful Feivel Fergesson, and the Mitzvah of Tzitzis? Why not a girl, say Feivel’s sister, by the name of Freidy?

Hey, I (Shazak author, M.M.) once knew this answer, but I forgot…. Hmmm, let me think… (days, weeks and months pass…)

Now I remember! Simple! Boys and men are usually the ones who need reminders… not girls and women.

We conclude Parshas Shlach with an unlikely Mitzvah, the commandment of Tzitzis. This Mitzvah seems to have no connection to the Meraglim, the main theme of the Parsha. How do Tzitzis tie into the Meraglim story?

In describing the benefits of Tzitzis, HaShem says, “So that you remember to do all of My Mitzvos and that – Lo Sasooroo – you not wander after your hearts and eyes…”

To understand this, Rashi tells us to wander back to the very beginning of the Parsha.

The word that we translated as “wander” is the same exact term Moshe used when telling the Meraglim to tour the Land in the beginning of this Parsha, Lasoor – לתור. That’s because, in the words of Rashi, our eyes and heart sometimes act like Meraglim, scouting out the world around us and coming back with foolish advice.

There you have it… In one word, Meraglim – Rashi is telling us how the Mitzvah of Tzitizis belongs in Parshas Shlach.

Come to think of it, the Mitzvah of Tzitzis is not only connected to the beginning of the Parsha, it also leads us to the next Parsha – Parshas Korach. This Mitzvah was used as “ammunition” to overthrow Moshe’s leadership! Tune in to next week’s Shazak Parsha to learn all about it.

Taking a good look at the shape of the Tzitzis fringes will result in a very important Torah lesson for all of us – you, me, your siblings, parents, friends, even your teachers – you get it – EVERYBODY! Seeing the Tzitzis reminds us to follow what HaShem tells us, instead of listening to our own “personal Meraglim” – spies.

On the one hand, Tzitzis must have separate strings. Eight of them on the four corners total 32 strings.

This is the lesson of Tzitzis, which symbolize the Mitzvos:

HaShem wants each of us to perform Mitzvos in our own separate and creative ways. We’re not robots, so when it comes to prayers, for example, we all find unique ways to connect with HaShem. We use our own tunes and think our own thoughts about the greatness of HaShem.

On the other hand, nobody has the right to change the Mitzvos of HaShem. We are encouraged to be unique and creative within the guidelines of the Torah. It’s important to be connected to HaShem and to the great Tzaddikim-leaders who guide us.

That, by the way, was the mistake of the Meraglim. Moshe gave them the opportunity to “do their thing” and spy the land – yet they forgot to be connected to Hashem and to Moshe. They blew it!

Let’s remember to be like Tzitzis: unique, but connected.

22 / 27
Sefer Bamidbar — Shlach
Prev Previous Breaking Shabbos
Next Tune in Next Parsha! Next