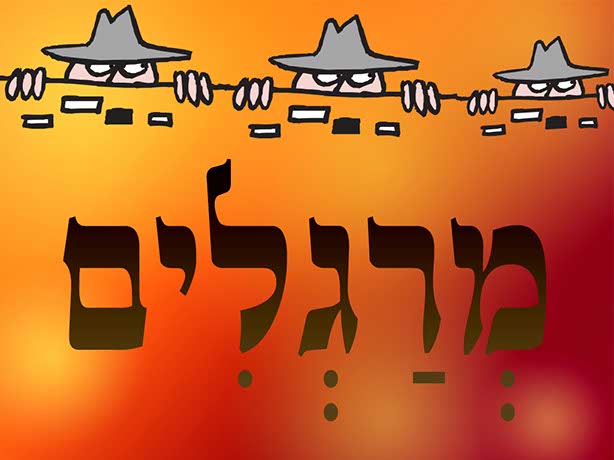 As mentioned, this tragic episode is known as the Sin of the Meraglim.

מ – The letter Mem – מ – equals 40, the amount of days the spies were in the Land of Israel. Look carefully at the shape of the Mem. It has an opening – the spies were able to enter the land easily and exit without any problem.

רגל – Regel – means “foot.” The spies walked the entire land – by Regel (foot) – checking it out.

But they weren’t just looking around. They were planning to give a bad report. In fact, Rashi in Parshas Kedoshim tells us that a person who goes around spreading evil rumors is called a “Rachil goer.” What’s a Rachil (רכיל)? Rashi shows how, that, with a quick switch of the letter ג (Gimel) with the letter כ (Chof), you get the word רגל, meaning foot. Get it?

י – Next comes the letter Yud – י – which equals 10. Ten out of 12 messengers failed their mission – only Yehoshua and Kaleiv held strong.

ם – The last letter – ם – is the same as the first one… almost. It’s a Final Mem, also equaling 40. The final result of this episode was the punishment – 40 years in the desert, with no way to get out – just like the Final Mem (ם) which has no way out. Once you are in, you’ll find yourself walking around in circles looking for the exit.

So there you have it – a secret uncovered –The entire Meraglim story – in one word! HOW EXCITING!

The Torah refers to the spies as “Anashim,” which Rashi tells us is a term reserved for “Kosher” people, who are upstanding, honest, respectable and good.

Indeed, at the time when Moshe sent them they were still fine Jews, and it was only later that they would mess up.

In fact, even later, it may be that – similar to Korach (see next week’s Shazak Parsha under the title “Kosher Korach?”) – they really had some good intentions behind their evil deeds.

Time for a Shazak Scenario:

“All my subjects are sooooo interesting! I just love the way my amazing teacher teaches us in such a creative and fun way!”

Indeed, no worries for Hymie. After all, Hymie’s mom and dad take care of his meals, his laundry and anything else he needs. All Hymie has to worry about is his homework, which he is always anxious to get done ASAP.

Life is great for young Hymie Himmelfarbskonivichstein (besides his long, hard-to-pronounce last name). If it was up to him, he’d stay in 3rd grade forever. Hymie realizes that the higher grades mean a lot less fun and a lot more work.

But Hymie is making a HUGE mistake. Yes, growing up may be more difficult, but that’s part of life – constantly growing and improving ourselves by taking on new challenges, no matter how difficult.

The 10 Spies were similar to Hymie – they were “Kosher” with good intentions, but they missed the point:

They wanted to stay in the holy, spiritual atmosphere of the desert, where HaShem sent them the Mon from heaven and took care of their every need, leaving them plenty of time to study Torah and serve HaShem. Even their clothes, our Sages tell us, were dry-cleaned and taken care of! These spies weren’t interested in changing their life style by moving to Eretz Yisrael – there they would have to work hard farming the land and earning a living. “It’s a land that eats its inhabitants,” they cried out.

Sounds like these spies were pretty holy people. But indeed they were making a colossal mistake! It was time for them to “grow up” – grow from serving HaShem exclusively in a spiritual way to a new and improved stage – combining both the spiritual with the physical.