15 / 27
Sefer Bamidbar — Shlach
Prev Previous Kaleiv Shouts!
Next “But The Land is Good!” Next
Puzzle
SHAZAK 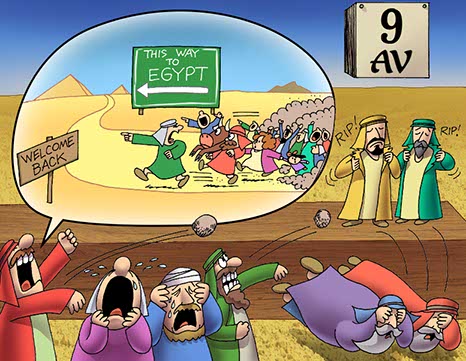 “It would have been better if we had died in Egypt, or here in the desert!” the people cried out. “Now we will face certain death at the hands of the nations of Canaan!”

Crying broke out throughout the camp.

It was, Tishah B’Av, the ninth day of the month of Av – a day that was to become the saddest day on the Jewish calendar.

When Bnei Yisrael wept that night, the night of Tisha B’av, HaShem declared, “My people have cried for no reason, without a cause, I will establish this day for them as a time of weeping throughout the generations.”

Indeed, the First Beis HaMikdash was also destroyed on the 9th of Av.

Five centuries later, on the 9th of Av, the Holy Second Beis HaMikdash was also destroyed.

Years later, in 1290, on the day of Tisha B’Av, Jews were expelled from the country of England.

In 1492, the Golden Age of Spain came to a close. That’s when Queen Isabella and her husband Ferdinand ordered the Jews to be banished from the land. They were given four months to leave the country. The date of expulsion? You guessed it – Tisha B’Av.

Britain and Russia declare war on Germany and World War 1 begins. And the date? Once again, Tisha B’Av.

The good news is that HaShem has promised us that this sad day will be transformed into a happy one with the rebuilding of the Third Beis HaMikdash, may it be built speedily in our days!

Show
15 / 27
Sefer Bamidbar — Shlach
Prev Previous Kaleiv Shouts!
Next “But The Land is Good!” Next