2 INSIGHTS: What Part of LO Don’t You Understand?Wine Country 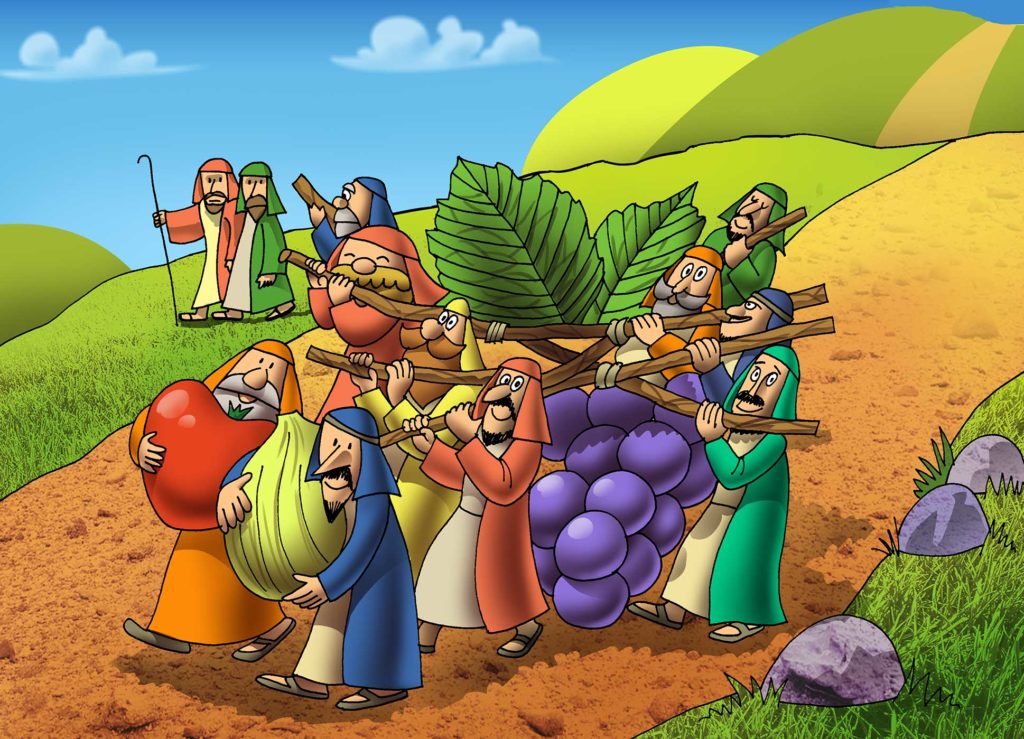 The 12 men continued their journey – walking, peering around corners, over fences, and under rocks. They came to the Valley of Eshkol and cut off a branch of a huge cluster of grapes. (BTW: the word Eshkol means a cluster.)

The cluster was so big that eight spies had to carry it on two poles! 8 spies on two poles?! It took the strength of another spy to carry an enormous pomegranate and yet another one to carry a gigantic fig! That’s 10 spies carrying this amazing food from the Holy Land, for all Bnei Yisrael to see, just as Moshe had instructed.

But, of course, this was all part of their terrible scheme – they planned to bring the fruits back to Moshe and the people, and scare them out of entering the land.

“We’ll tell everyone that this land is not meant for ordinary people.”

“We’ll show them these colossal, gigantic, gargantuan, enormous, humongous fruit and that will give them a taste of what lies in store for us.”

“Yeah, nothing but giant problems!”

Yehoshua and Kaleiv heard what the others were saying, and they did not approve. Courageously Yehoshua proclaimed, “If you plan to use these incredible fruits for your evil plan, we don’t want any part of it, don’t ask us for any help carrying it.”

Now, Kaleiv joined in, as he called out in a loud voice, “The answer is Lamed Aleph, which spells LO – NO! Count us out!”

So 10 of the spies continued on their way home carrying the enormous fruits.

What Part of LO Don’t You Understand?

Remember back in Parshas Yisro? At Matan Torah, the giving of the Torah, one of the miracles was that Bnei Yisrael saw the words of the Aseres HaDibros.

Why did HaShem make this miracle? Why was hearing not enough?

Here is a very interesting answer:

Ever heard of “homophones?” No they are not headphones. They are two words that sound the same but have completely different meanings. “Hear” and “hair,” “due” and “do,” “two” and “too” etc. In Hebrew, the words לו (to him) and לא (not) are pronounced exactly the same, – they both sound like the English word “low.” It’s only when the words are written that you can see that one is spelled with a Vav, and the other with an Aleph.

So if the people would only hear the Aseres HaDibros, they may misunderstand commands such as Lo Sirtzach and Lo Signov (“do not murder” and “do not steal”) to mean “to him, murder,” and “to him, steal.” Oy Vey!

To make sure that no one makes such a mistake, HaShem showed the people the words as well, making it very clear that he meant LO with an Aleph!

Now you know why (according to the Shazak version) Yehoshua and Kaleiv had to spell it out – “The answer is Lamed Aleph, which spells LO – NO! Count us out!”

Israel is well known for producing fine wines. Archeologists have found ancient wine presses going back a long, long time. Yes! Jews have been expert wine makers for thousands of years. Our Parsha is a prime example of the Jews’ interest in wine production – it’s when the spies brought back gigantic grapes from Eretz Yisrael – huge grapes for huge amounts of high quality wine.

BTW: If this picture of the spies carrying a bunch of grapes on a pole is familiar, that’s because it is used as the logo of both the Israeli Carmel Winery and the Israel Government Tourist Office.

Next time you’re in Israel, visit any of the many wineries and some of them will even show you the ancient wine press nearby. Why do they do that?” you may ask. “Wine” not?” you may answer.