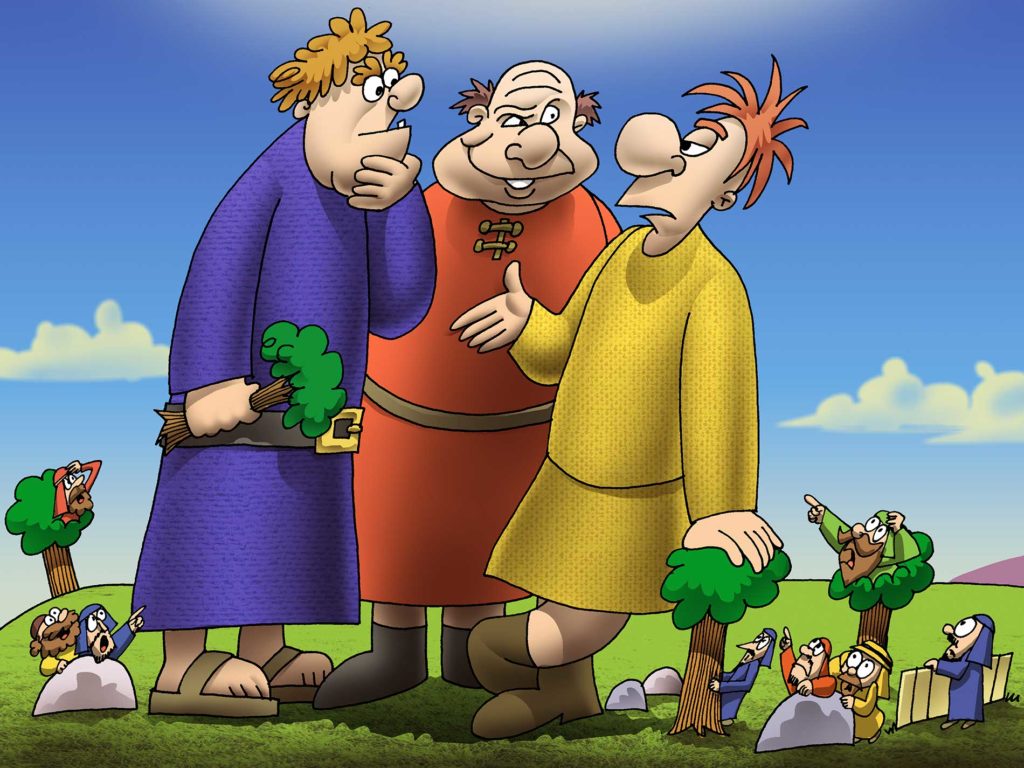 Suddenly, the spies were face to face (well, more like face to foot) with the shock of their lives… GIANTS!

“Look up!” they exclaimed.

Towering way above the trees, 3 giants looked down at the spies.

“Hey!” said one gigantic giant. “Those little creatures down there are taking our fruit! What are those creatures anyway… grasshoppers?”

“Naaaaah, leave ‘em alone,” said the strongest and biggest of the giants. “They won’t be able to take much.”

Suddenly… “Take a look at this!”

The giants bent over and squinted their eyes to get a better look. When they saw the spies struggling to carry even one piece of fruit, they roared with laughter.

“They can barely carry a single blueberry!”

They stepped carefully over the spies with their huge feet, making sure not to crush them, and left them in peace.

Well, which one is it – grasshoppers or locusts? Confusing?! It sure is!

After careful investigation and a lot of research Shazak has come to the conclusion that this locust/grasshopper confusion is exactly that – one real big mix-up!

Have you noticed how the giants couldn’t make up their minds whether the spies were like grasshoppers or like ants?

What are those creatures anyway… grasshoppers?”

Indeed, the Torah writes that when the spies came back to the camp of Bnei Yisrael, they reported, “we were like Chagavim (translated locusts or grasshoppers) in their eyes.”

But when Rashi tells us about the giants looking down at them, he changes something – according to him the giants said to each other, “Look! There are little things down there in the vineyards, they’re like people, but as small as Nemalim – as ants!”

So if the spies themselves said they were like Chagavim (locusts or grasshoppers), why does Rashi change it to Nimalim (ants)?

Most scholars are of the opinion that it was actually a printing mistake! Originally Rashi wrote Chagavim, but somehow someone messed up and changed it! (BTW: Don’t forget that Rashi wrote his commentary almost a thousand years ago, so these mistakes could happen once in a while.)

We at Shazak would like to suggest that there was no printing mistake and Rashi changed the wording on purpose:

Remember back in the start of the Parsha, Rashi told us that the spies were “Kosher” at that beginning? Well, if you recall back in Parshas Shemini (see “Yemen, Morocco, Jerusalem… and Locusts”), Chagavim (locusts) are Kosher but Nemalim (ants) are not.

So Rashi is telling us that the giants realized they weren’t Kosher! They said, “These guys down there are not ‘Kosher’ – they are like ants.”

But of course, the spies couldn’t repeat those words to Bnei Yisrael – that would make them admit they themselves weren’t Kosher, so instead they changed it and reported “we were like (Kosher) Chagavim in their eyes!”